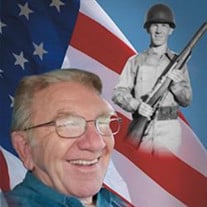 B. Fred Ketron, 87, of Kingsport, passed away unexpectedly on August 29, 2021. He was a lifelong resident of Kingsport; raised in the Bloomingdale community and a graduate of Lynn View High School. Fred served in the U.S. Army during the Korean Conflict. In 1976, after 20 years working for Eastman, he returned to Bloomingdale where he owned and operated Bloomingdale Hardware for many years; and in 1995 he became a full-time licensed contractor. If you knew Fred at all, you know he loved road trips, often to Pigeon Forge. It wasn’t unusual for him to wake up early and impulsively take off to Gatlinburg for chocolate, all the while looking at prospective properties to build on or his next family cabin rental. He dearly loved his family, especially his granddaughters. Time with them was so important that he instituted Friday Night Dinners where everyone gathered for movie night in the home theatre he built. Christmas was especially nostalgic and he took great delight in having all the Ketrons over for lots of food and the ridiculously funny White Elephant game! As Fred was the 7th of 8 children, his sister Barbara was often babysitter he continued to seek advice and confided in “Sister” about lots of things. The last four years of his life, daughter Amy cooked and cared for him in the home; her presence brought him great comfort. Also Fred was greeted each morning by son-in-law Paul who delivered breakfast, took care of Dad’s “to do” list, and gave grandkid updates. Paul was a faithful son-in-law and provided caregiving above and beyond what was expected. Fred came to know the Lord later in life and we are comforted to think of him healthy and whole, driving around heaven planning a remodel of some sort. He was preceded in death by parents, Alfred Habe and Lethea Hixson Ketron; sisters, Ruby Bell Ketron and Janie Ruth Ketron; and brothers T. Paul Ketron, Herman Junior Ketron and W.T. “Jack” Ketron. Fred was one-of-a-kind and among those who will never forget him are two daughters, Sandy K.Vowell (husband Paul) and Amy L. Ketron; his granddaughters Stephanie, Jessica, and Kelly; great-grandchildren Tristen, Leilani, Cole, and Sophie; sisters, Barbara K Lane and Shirley Peters (Tampa); his favorite nieces and nephews (many in number!); and also grandchildren Amanda and David Vowell. The family has chosen to have a graveside service on Monday, September 27, 2021, at 11:00 am at Oak Hill Memorial Park in Section D. Rev. Wayne Baker will officiate. Military honors will be conducted by The American Legion Hammond Post #3 and Gate City, VA Post #265. The family would like to extend special thank you and appreciation to Nurse Kelli at Amedisys, and to his daily caregivers who kept him company, served him chocolate, and generally tolerated his bad jokes. In lieu of flowers, memorial contributions in Fred’s memory may be made to the Bloomingdale Volunteer Fire Department, 3017 N. John B. Dennis Hwy., Kingsport, TN 37664. Online condolences may be shared with the family by visiting www.oakhillth.com or may be mailed to the family ℅ Sandy Vowell, 265 Rock City Rd., Kingsport, TN 37664. The care of B. Fred Ketron and his family has been entrusted to the staff of Oak Hill Funeral and Cremation Services.

B. Fred Ketron, 87, of Kingsport, passed away unexpectedly on August 29, 2021. He was a lifelong resident of Kingsport; raised in the Bloomingdale community and a graduate of Lynn View High School. Fred served in the U.S. Army during the Korean... View Obituary & Service Information

The family of B. Fred Ketron created this Life Tributes page to make it easy to share your memories.

B. Fred Ketron, 87, of Kingsport, passed away unexpectedly on...

Send flowers to the Ketron family.