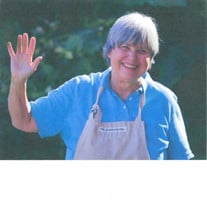 SAN FRANCISCO, CA – Barbara Sue Klutinis, 77, was reunited with her family in heaven on July 7, 2020, after a courageous battle with breast cancer. She was a loving wife, mother, grandmother, sister, filmmaker, fly-fisher, and feminist. She was born in St. Louis, MO on February 2nd, 1943 and moved shortly thereafter with her parents to Kingsport, TN. Barbara was a 1961 graduate of Dobyns-Bennett High School, where she was known as “Klu.” She was a graduate of the University of Tennessee where she studied bacteriology. She later worked as a lab assistant on the rubella vaccine with Georgetown University. It was late one night at work that a colleague said, “You’re going to grow old in this lab!” which sparked a whole new chapter of Barbara’s life. Barbara joined Pan American Airways as a flight attendant in 1970, where she had the privilege of traveling the world, all the while making lifelong friends. She also worked as still photographer in her spare time. After her career with Pan American and while starting her family, she received her master’s degree in Film Production from San Francisco State University in 1986, where she taught film theory. She also taught at Skyline College for 16 years. Barbara has been making meaningful films since 1981. Her films including Pools, Trumpet Garden, Still Life with Barbie, Call to the Dark Side, and Severing the Soul have made rounds of film festivals in the United States, Mexico, Canada, Europe, and Japan. She also worked with young school children at the Rooftop School, where her children attended, and taught them animation and editing their animation on the computer. After her retirement in 2005, she took up fly fishing. She fished all over the world, from Argentina to Iceland. She was a member of the Golden West Women Fly fishers, the International Women Fly Fishers, and the Golden Gate Angling & Casting Club. Barbara’s first conventional documentary film, Stepping into the Stream, brings the viewer into the world of fly fishing through interviews and footage of women angling. Barbara believed it was important to show the connection between the angler, her life experiences, and the angling environment. Barbara’s 2014 film, The Sum Total of Our Memory, explores how couples deal with Alzheimer’s. This documentary was inspired by experiences with her husband, who was diagnosed with Alzheimer’s in 2010. Barbara film is intended to show people that there is a way to get through Alzheimer’s and that one does not have to feel alone. This film was screened at the NOVA International Film Festival in Fairfax County, VA and at the Mumbai Women’s International Film Festival in Mumbai, India. Barbara was preceded in death by her parents, Walter Paul, and Bernice “Bunny” Ramont Klutinis. Barbara leaves behind to cherish her memory, her husband of 40 years, Jerome M. Steiner, Jr., San Francisco, CA; her son Daniel Steiner, San Francisco, CA; her son Matthew Steiner, his wife Hannah White and their two children, Hazel and Leo of San Rafael, CA; her brother, David Anthony Klutinis, Spokane, WA; sister Becky Sue Berry and her husband, Michael L. Berry, Kingsport, TN; sister, Pamela Sue Cole, Spartanburg, SC; special aunt Mary M. Klutinis, St. Louis, MO; several nieces, nephews, cousins, and many friends. The family would like to send special thanks to the doctors, nurses and staff of UCSF Medical Center, San Francisco, CA for their expert care during Barbara’s five-year battle with breast cancer. Special thanks also to Portola Gardens Assisted Living Community in San Francisco that provided expert care and kindness to Barbara and her family in her final days. The San Francisco Columbarium and Funeral Home, San Francisco, CA is serving the family of Barbara Klutinis. No public services are scheduled at this time. Memories can be shared at dignitymemorial.com. Online condolences and memories may be shared, locally, by visiting www.oakhillfh.com Oak Hill Funeral and Cremation Services, Kingsport, TN, is in charge of local arrangements.

SAN FRANCISCO, CA &#8211; Barbara Sue Klutinis, 77, was reunited with her family in heaven on July 7, 2020, after a courageous battle with breast cancer. She was a loving wife, mother, grandmother, sister, filmmaker, fly-fisher, and feminist.... View Obituary & Service Information

The family of Barbara Klutinis created this Life Tributes page to make it easy to share your memories.

Send flowers to the Klutinis family.