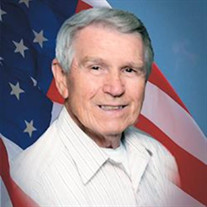 Billy Ross Jones, 86, of Kingsport, passed away peacefully at his home on Friday, August 27, 2021, with his family by his side. Bill was born on September 29, 1934, in Dungannon, VA, to the late William Thomas and Amnie Pearl Childress Jones. He graduated from Shoemaker High School in 1952, then served in the Naval Air Force from 1957 to 1961, where he was stationed in Norman, OK; Guam; the Philippines; Barber’s Point, HI; and Midway Island. While in Midway, he flew the Airborne Early Warning barrier between Midway Island and the Aleutians as an air controller. Following his discharge, he returned to work at Mead Corporation before retiring in 1990 with 37 years of service. Bill was a devoted husband, father, grandfather, brother and friend. He enjoyed attending his children’s and grandchildren’s sport functions as well as traveling with family and friends. Bill discovered karaoke in which he and his wife Joan visited and entertained residents at many assisted living facilities. He also played many years of senior softball in local leagues and at Kingsport State Senior Games. In addition to his parents, Bill was preceded in death by sisters, Pauline Jones Bledsoe, Mary Jones Vermillion Harless, Evelyn Mae Howard/Brewton, Nancy Lee Jones Pittman Day, and brothers, Tommy Jones, Jr. and Mack Glenn Jones. Left to cherish Bill’s memory are his wife of 59 years, Joan M. Jones; sons, Randall M. Jones (Dana) and Christopher W. Jones (Melissa); and grandchildren, Katie M. Jones, Kerri L. Jones, Bethany J. Selby (Jake), and Benjamin R. Jones. Graveside Service will be conducted at 2:00 pm, Sunday, September 5, 2021, in the Garden of the Last Supper in Oak Hill Memorial Park with Pastor Jon Rogers officiating. Memorials may be made in Bill’s honor to any veteran’s project such as Wounded Warriors or the American Red Cross for flood relief for Middle TN. To share memories and condolences with the family please visit www.oakhillfh.com The care of Billy Ross Jones and his family has been entrusted to the staff of Oak Hill Funeral & Cremation Services.

Billy Ross Jones, 86, of Kingsport, passed away peacefully at his home on Friday, August 27, 2021, with his family by his side. Bill was born on September 29, 1934, in Dungannon, VA, to the late William Thomas and Amnie Pearl Childress Jones.... View Obituary & Service Information

The family of Billy Ross Jones created this Life Tributes page to make it easy to share your memories.

Billy Ross Jones, 86, of Kingsport, passed away peacefully at...

Send flowers to the Jones family.