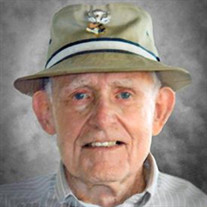 Bryce “Cotton” Bailey, 96, of Kingsport, went to be with the Lord Friday, November 12, 2021, at Holston Valley Medical Center. He was born and raised in Dante, VA and had lived in Kingsport since the 1950’s. Mr. Bailey served in the U. S. Army, in the 161st Parachute Engineer Battalion, Company C, earning the rank of sergeant, during WW II. He retired from the Kingsport Press in 1987 as a Pressman. Mr. Bailey was a founding member of First Assembly of God Church where he served as a deacon, Sunday School Superintendent and was a faithful attendee until his declining health. He enjoyed playing golf, having a made a hole in one at Warrior’s Path Golf Course. But his favorite pastime was telling a joke or a war story to anyone who would listen. Most of all Mr. Bailey loved spending time with his family, especially his grandchildren. He was preceded in death by parents, Emmit and Mattie Castle Bailey and two brothers, Harold Bailey and Dewey Bailey. Those left to cherish his memory are his loving wife of 68 years, Biddie Sawyer Bailey: daughters, Angie Dotson (Larry) and Kathy Willis (Chuck); granddaughter, Melissa Dotson-Rumsey (Trevor); grandson, Nicholas Willis (Ireland); several nieces and nephews. The family will receive friends from 1:00 pm – 1:45 pm Tuesday, November 16, 2021 at Oak Hill Funeral Hill Funeral and Cremation Services in the J. Wayne Hamilton Memorial Chapel. A Funeral Service will follow at 2:00 pm with Rev. Paul Wright and Pastor Ron McEwen officiating. Military Graveside Rites, conducted by the American Legion Post #3 & Post #265, will follow at Oak Hill Memorial Park in the Garden of Everlasting Life. In lieu of flowers, memorial contributions may be made to the Wounded Warrior Project online at www.woundedwarriorproject.org The family would like to extend a sincere thank you to the doctors and nurses at Holston Valley in the ER, ICU and on third Floor Wilcox. The care of Bryce “Cotton” Bailey and his family has been entrusted to the staff of Oak Hill Funeral & Cremation Services.

The family of Bryce "Cotton" Bailey created this Life Tributes page to make it easy to share your memories.

Send flowers to the Bailey family.