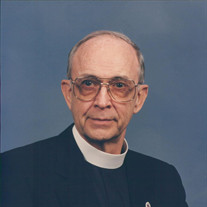 Dr. Charles Edward “Ed” Osborne, 92, of Kingsport, died Wednesday, December 29, 2021. Born in Mt. Croghan (S.C.) on August 5, 1929, the son of Edward Ruffin and Emeline Gladys Osborne. He lived his early life in Hendersonville (N.C.), where he attended Hendersonville High School and graduated in 1947. Ed earned his baccalaureate in chemistry in 1951, from the University of North Carolina, then his Master of Science in Chemistry from University of Maine in 1953. While attending Northwestern University, Ed met and married the love of his life before going on to earn his Ph.D. in Chemistry in 1956. The academic honor societies of which he was a member included Phi Beta Kappa, Sigma Xi, Phi Kappa Phi, and Phi Lambda Upsilon. He was also a member of the American Chemical Society for over 70 years. Ed joined Eastman Chemical Co. in 1956, and worked as an organic chemist until his first retirement in 1999. Ed and his wife joined St. Paul’s Episcopal Church in 1960. He was on the Board of Vestry for two three-year terms and was Chairman of the Buildings and Grounds Committee where he and his family would help maintain the grounds every Saturday. After six years of intensive study and passing the appropriate examinations, Ed was ordained by Bishop Sanders on June 25, 1981, and became a non-stipendiary deacon. A few months after his retirement from Eastman, Ed joined Northeast State Community College as a tutor and lab instructor. In 2004, he became a full-time faculty member and taught Organic Chemistry I and II, Introduction to Chemistry, and occasionally, General Chemistry. In 2011/2012, he was awarded the Distinguished Faculty Member Award. He retired as a full professor in 2020, and in 2021, Ed was awarded professor emeritus of chemistry. He was preceded in death by his mother and father, Emeline and Edward Osborne, along with his sisters Gladys Gertrude “Trudy” Haskell and Anne Miller. He is survived by his beloved wife of over 66 years, Columbine “Collie” (Amici); daughter, Christine Megan Osborne; son, Dr. Gregory Evan Osborne and his wife, Heather; grandchildren, Alex and Nick Engstrom; step-grandchildren, Brandon, Kiley, and Jason McMillian; step-great-grandchild, Erica McMillian; as well as several nieces and nephews. Dr. Osborne’s life was devoted to God, family, learning, and teaching. Many of his students went on to successful careers and he spoke about them often. Ed felt he had a long and very satisfying life and was blessed to have the most wonderful wife and children he could ever have imagined, as well as many valued family and friends. He will be greatly missed. A Memorial Service will take place on Wednesday, January 5, 2022, at 1:00 PM, at St. Paul’s Episcopal Church, Kingsport. In lieu of flowers, memorial contributions may be made to St. Paul’s Episcopal Church Food Pantry, 161 East Ravine Street, Kingsport, TN, (423) 245-5187. To share memories and condolences with the family please visit www.oakhillfh.com The care of Dr. Charles Edward “Ed” Osborne and his family has been entrusted to the staff of Oak Hill Funeral & Cremation Services.

The family of Dr. C.E. "Ed" Osborne created this Life Tributes page to make it easy to share your memories.

Send flowers to the Osborne family.