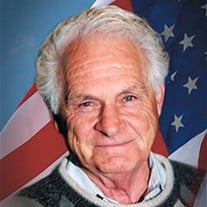 Carl Edward Cornett died peacefully January 29, 2020, from complications of asbestosis at the James H. Quillen VA Medical Center, Mountain Home, Tennessee. He was born January 1, 1934, in Wise County, Virginia to the late Maude E. Neeley and Vivian R. Cornett. His family moved to Mocassin Gap, Scott Co. in 1940, where Carl spent his childhood and graduated from Shoemaker High School in 1951. He served in the U.S. Navy from January 1952, through November 1954, aboard the USS Navarro and the sub-tender USS Fulton. He attended Steed College and married Jessie Rhoten on September 2, 1955. They resided in Weber City until moving to Church Hill, TN in 1962, coinciding with his employer, American Saint Gobain’s completion and opening of the company’s new plate glass facility at Greenland, Hawkins County, TN. Carl retired 37 years later from what had become AFG. He built his first house in his mid-twenties and from that time on he enjoyed buying and selling land and building apartments and houses doing so into his seventies. He served on the Church Hill Planning Commission, was a life member of the Kingsport Chapter #38 Disabled American Veterans and a life member of Church Hill Post #9754 of the Veterans of Foreign Wars. Carl was a long time member of the Northeast Church of Christ. Carl had a wonderful sense of humor, loved to travel and inherited a love and appreciation for the beautiful area of SW Va. and NE TN. He was a most loving and generous husband, father, grandfather and great-grandfather. In addition to his parents, he was preceded in death by his loving wife of 64 years, Jessie Kate Rhoten; daughter, Carla Grace Christian; granddaughter, Emily Grace Johnson; great-granddaughter, Quinn Ellis Cornett; daughter in law, Caroline Nash Coleman Cornett; brothers Harold H., J. Donald (Don), and Robert E. (Bobby) Cornett; beloved grandparents, Sarah Etta Fraley and Samuel H. Neeley Sr. and Margaret Magdalene (Maggie) Blondell and James M. Cornett. Those left to cherish his memory are his sons, Marc, Mike, and wife, Laura; daughter, Julie and husband, Jerome Gouge; son, Sam and son-in-law, Clark Christain; grandsons, Jessee and Joseph Cornett and Dylan Christian; great-grandsons Elijah, Lucas, Henry and Nash Cornett; great-granddaughter, Scarlett Grace Johnson; beloved sister, Dolores Cornett Phillips of Chattanooga, Tn. and special aunt, Betty B. Neeley of Johnson City, Tn.; many wonderful cousins, nieces and nephews. The family will receive friends from 1:00 pm -2:45 pm Sunday, February 9th, 2020, at Oak Hill Funeral and Cremation Services in the J Wayne Hamilton Memorial Chapel. A Memorial Service will follow at 3:00 pm with Tim Hall, Minister officiating. Military Rites by the U.S. Navy Funeral Honors Team and the Hawkins County Color Guard will follow. In lieu of flowers, memorial contributions may be made to Disabled American Veterans, dav.org or Veterans of Foreign Wars, vfw.org. The family would like to recognize and thank the entire medical staff for the excellent medical care he received at VA Medical Center, especially the efforts of Dr. Douglass R. McDonald and his entire surgical staff, the entire ICU team and the wonderful hospice team at the VA's Community Living Center. The family is indebted to Dr. Gerry Bocarossa whose conscientious and diligent care over the last several years helped allow Carl to have a quality of life in which he remained active, productive and able to manage his own affairs until he entered the medical center January 8, 2020. Carl donated his body to Restore Life USA, a public charity that works with many medical researchers and educators throughout the United States that are discovering new and innovative methods to advance the practice and study of medicine. To leave an online condolence for the family please visit www.oakhillfh.com The care of Carl Edward Cornett and his family has been entrusted to Oak Hill Funeral & Cremation Services.

The family of Carl E. Cornett created this Life Tributes page to make it easy to share your memories.

Send flowers to the Cornett family.