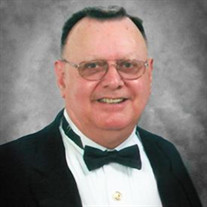 Charles Edwin Cave, 78, of Mt. Carmel passed away at his residence with family by his side after a lengthy illness on Monday, March 28, 2022. Charles was born in Jonesville, VA on April 24, 1943, to the late Henry and Elizabeth (Hines) Cave. He was also preceded in death by his daughter, Penny Gasper and her husband, Michael. Charles was a member of Grange Hall United Methodist Church. He was active in Boy Scouts for 30 years. Charles was part of the Wednesday crew at Camp Davy Crockett. He was recipient of the BSA Pioneer Award, Sequoyah Council Silver Beaver Award, was a Vigil member of the Order of the Arrow. He was a 33° Mason and a member of various organizations of Freemasonry. Charles was a 50 year plus member of Clintwood VA Lodge #66, Past Master of Catlet Lodge #33, and Honorary Member of Clay Lodge #356, Johnson Commandry #14 Knights Templar, Virginia York Rite, KYCH, Red Cross Constantine, AMD, and installed Sovereign Master. He also received the Masonic Scouter award. He was a Past Grand High Priest of Virginia Royal Arch Masons and received the Ish Sodi Award. Charles was an accomplished cabinet maker. He retired after 32 years as a Rural Letter Carrier for the U.S. Postal Service. Those left to cherish Charles’ memory are his loving wife of 58 years, Brenda Cave; son, Barry Cave (LeAnn); sister, Dorothy Ford (Wendell); grandchildren, Morgan Cave (Harley), Austyn Cave, Tiffani Mays (Marcus); great-grandchildren, Chase, Olivia, Ayden; and special cousin, Betty Crumley (James). The family will receive friends from 12:00 pm until 2:00 pm on Saturday, April 2, 2022, in the chapel of Oak Hill Funeral & Cremation Services. The Funeral Service will be conducted at 2:00 pm in the chapel with Pastor Robert McCann officiating. Masonic Rites will be performed by Clintwood Lodge #66. A Graveside Service will follow in the Garden of Everlasting Life at Oak Hill Memorial Park. To share condolences and memories with the family please visit www.oakhillfh.com The care of Charles Edwin Cave and his family has been entrusted to the staff of Oak Hill Funeral & Cremation Services.

Charles Edwin Cave, 78, of Mt. Carmel passed away at his residence with family by his side after a lengthy illness on Monday, March 28, 2022. Charles was born in Jonesville, VA on April 24, 1943, to the late Henry and Elizabeth (Hines) Cave.... View Obituary & Service Information

The family of Charles Edwin Cave created this Life Tributes page to make it easy to share your memories.

Charles Edwin Cave, 78, of Mt. Carmel passed away at his residence...

Send flowers to the Cave family.