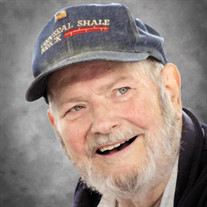 Clarence E. (Gene) Harkness, Jr., 78, of Kingsport, went to be with the Lord Thursday, February 24, 2022, at the residence of his daughter surrounded by his loving family. He was born August 14, 1943, in Burlison, TN to the late Clarence and Ruth Harkness, Sr. Clarence was an amazing and devoted son, father, grandfather, great grandfather, brother and friend. He enjoyed art, music and woodworking. Clarence retired from General Shale following twenty-five years of service. He was a member of Emmanuel Baptist Church where he served as a deacon. In addition to his parents, Clarence was preceded in death by his wife, Carol Harkness; sister, Jane Harkness; brother, Rickie Harkness. Those left to cherish his memory are his daughter, Nova Davis and husband, Chris; son, Richard Harkness and wife, Robyn; grandchildren, Michael Barrett and wife, Julia, Michala Barrett Cannon and husband, Matthew, Cierra Harkness and Treyce Harkness; great-grandchildren, Alura Dawn Cannon and Astra Dean Cannon; sister, Joyce Garrett; several nieces, nephews and cousins also survive. The family will receive friends Monday, February 28, 2022, from 5:00-6:45 pm at Emmanuel Baptist Church. A Celebration of Life Service will begin at 7:00 pm with Rev. Richard “Trey” Harkness and Pastor David Powers officiating. The Entombment Service will be conducted Tuesday, March 1, 2022, at 11:00 am in the Chapel Mausoleum at Oak Hill Memorial Park. Nephews will serve as pallbearers. The family extends their sincere gratitude to the staffs of Johnson City Medical Center and Amedisys Hospice for their compassionate care of Clarence. In lieu of flowers, memorials may be made to Emmanuel Baptist Church, 2118 Bloomingdale Road, Kingsport, TN 37660. To share memories and condolences with the family please visit www.oakhillfh.com The care of Clarence E. Harkness and his family has been entrusted to the staff of Oak Hill Funeral & Cremation Services.

Clarence E. (Gene) Harkness, Jr., 78, of Kingsport, went to be with the Lord Thursday, February 24, 2022, at the residence of his daughter surrounded by his loving family. He was born August 14, 1943, in Burlison, TN to the late Clarence and... View Obituary & Service Information

The family of Clarence (Gene) Harkness, Jr. created this Life Tributes page to make it easy to share your memories.

Send flowers to the Harkness, family.