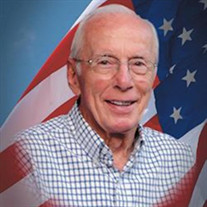 If you ever met Dave Coffey, chances are he shared a story with you. Now is the time to share the story of his life. Born on January 28, 1922, to Tazzie (Loftis) and Duke David Coffey, “Junior” as he was called by friends, was raised in Bristol, Tennessee. While attending Tennessee High School, he served as Student Council President, Senior Class President, and was awarded “Best All Around Boy”. He played football, marched in the school band and graduated in 1941. Dave was awarded a co-op scholarship to The University of Cincinnati and started his college education while co-oping in Saltville, VA. After Pearl Harbor, Dave enrolled in the V-12 Navy College Training Program, which was designed to supplement the forces of commissioned officers in the United States Navy for World War II. The Navy sent him to Purdue University, where he graduated with a degree in Chemical Engineering. After graduation, Dave was sent to Midshipmen School at Columbia University in New York City. He graduated as an Ensign in the Navy (1945), attended Diesel School in Miami, FL. and then shipped out to the Pacific on the U.S. Eisner, a Destroyer Escort. He was discharged from the U.S. Navy in 1946, as a Lieutenant, Junior Grade. Dave moved to Woodbury, New Jersey where he met his life-long soulmate, Geraldine Tremaine Elmer. After their wedding, he accepted a job at Holston Defense Army Ammunition Plant, and they moved to Tennessee. One of his favorite stories centered around the day they got a call about a baby girl available for adoption. On first meeting the baby, there was an immediate bond, and Linda became their greatest joy. Dave always had a heart for community and world service. As a member (and former president) of the Kingsport Rotary Club, he went on mission trips to Haiti in order to establish a vocational school. As a member of Colonial Heights Presbyterian Church, he was involved in many roles, but his favorite story was chasing a runaway black sheep through Colonial Heights during the outdoor Christmas Pageant. In 1969, Dave was one of the founders of Sing-Out Kingsport, a group of High School students who performed songs of social justice. Dave excelled at sports, but tennis was his favorite and he played until the age of 96. He had a famous shot dubbed by others as “Coffey’s Corner”! Other interests included fishing, camping, golf, photography, traveling, and woodworking. Most of his friends have some sort of creation which he lovingly made in his workshop. One of his favorite monthly events was gathering with his Bridge Club, which later became a social club. These friends had a history of fifty-five years together. There was always a dog in the Coffey house and Dave leaves behind his loyal partner, Maxwell House (Max) who will be lovingly cared for by his daughter, Linda. When The Blake of Kingsport opened, Dave knew that it was time to move and left his house of 62 years to move into his “new" home. The staff and residents of The Blake have been like family to him and it was one of his best life decisions. Dave was preceded in death by his parents, Tazzie (Loftis) and Duke David Coffey, his wife, Geraldine, sister Gladys (Neal) Smith, and nephew Rick Lewis. Treasuring his memory are his daughter - Linda Coffey, Brother, Jack (Shirlene) Coffey, Nephews - Steve (Patti) Smith, Eric (Lori) Coffey; Nieces, Sandra (David) Booher, Jennifer (Frankie) DuBusk, and Linda Lewis. He was loved by many great nieces and nephews, and great-great nieces and nephews. In an effort to sum up a fitting description of the person Dave was known to be, a line from one of his favorite musicals states it best, “I never met a man I didn’t like” (Will Rogers Follies). Dave had a heart for charities, and nothing would please him more than to have memorials made in his name to the Rotary Club of Kingsport Foundation, Kingsport Community Foundation, or Colonial Heights Presbyterian Church. A Celebration of Life Service will be conducted at 4:00 p.m. Sunday, September 20, 2020, under the main entrance portico of Oak Hill Funeral Home. The Rev. Dr. Bradley K. Walker will officiate. Music will be provided by Jenny Rogers, Andy Rogers and Kim Morgan Dean. The family will receive friends immediately following the service. A private inurnment committal service will be held at a later date at Oak Hill Memorial Park. The family respectfully requests those attending the service to please wear a mask and practice social distancing. For those unable to attend, the service will be streamed live on Linda Coffey’s Facebook page. To leave an online condolence for the family please visit www.oakhillfh.com The care of David Duke Coffey and his family has been entrusted to the staff of Oak Hill Funeral & Cremation Services.

If you ever met Dave Coffey, chances are he shared a story with you. Now is the time to share the story of his life. Born on January 28, 1922, to Tazzie (Loftis) and Duke David Coffey, &#8220;Junior&#8221; as he was called by friends, was... View Obituary & Service Information

The family of David Duke Coffey created this Life Tributes page to make it easy to share your memories.

If you ever met Dave Coffey, chances are he shared a story with...

Send flowers to the Coffey family.