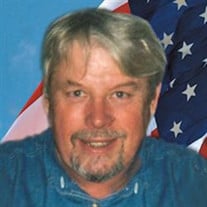 David Richard Hickman 73, of Kingsport, passed away peacefully on Wednesday, July 29, 2020. Richard was born on December 28, 1946, in Kingsport, to the late Mary Hickman. He was a Journeyman Electrician and retired from the local IBEW 934. Richard was an Army Veteran during Vietnam and was a member of the American Legion. He lived life to the fullest no matter his limitations, he never stopped picking music, gardening, antiquing and spending time with his family especially his grandchildren. In addition to his parents, Richard was preceded in death by his sister, Jeanette Davis and his in-laws, Frank and Jean Stapleton, maternal grandparents, Ezra and Sarah Osborn. Left to cherish his memory are his loving wife of 50 years, Shirley Hickman; son, Jamie Hickman (Misty); daughter, Beth Luttrell (Jason); grandchildren, Sydney, Haley, Seth, Ezra, Jacob and Hayden; sister, Pauline Hickman; several nieces, nephews, cousins and many friends. Military Graveside Rites will be conducted at 1:00 pm Tuesday, August 4, 2020, by the American Legion Hammond Post 3/265 Kingsport/Gate City in the Garden of the Last Supper, Oak Hill Memorial Park. Those wishing to attend are asked to meet graveside at 12:50 pm. Family and friends will serve as pallbearers. In lieu of flowers, memorial contributions may be made to the American Kidney Foundation or the American Diabetes Association . The family would like to thank all the doctors, nurses, staff, family and friends who helped and cared for Richard and his family along the way. Online condolences may be made by visiting www.oakhillfh.com The care of Richard Hickman and his family has been entrusted to the staff of Oak Hill Funeral and Cremation Services.

David Richard Hickman 73, of Kingsport, passed away peacefully on Wednesday, July 29, 2020. Richard was born on December 28, 1946, in Kingsport, to the late Mary Hickman. He was a Journeyman Electrician and retired from the local IBEW 934.... View Obituary & Service Information

The family of David Richard Hickman created this Life Tributes page to make it easy to share your memories.

Send flowers to the Hickman family.