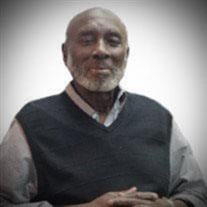 Dennis Edward Michael was born November 17, 1948 in Georgetown, Guyana to the late Edward Wiltshire and Mary Michael. While enjoying a stay with his son, Dennis Edward Michael answered God’s call to come home to rest on Saturday, May 2nd, 2020 at 7:07 AM. Dennis was a native of Guyana, South America, but moved to the United States to create the American dream for his family and himself; it became his home for over 45 years. He and his family first resided in East Orange, New Jersey and later re-located to Atlanta Georgia where he spent most of his adult life. Dennis was a “people person” who focused on customer service which led to his entrepreneurial venture, Neat Feet Shoes in Decatur, and later a long and fulfilling career as a private home health nurse. He retired from the private nursing profession with over 20 years of exemplary service to his patients who often considered him “part of their family.” He was known by family and friends for his exuberant love of life; he loved to dance, sing, and greet everyone he met with a hearty “Good morning, Good afternoon, or Good evening” along with a big smile. He was preceded in death by his oldest son Wyatt Michael, parents Edward Wiltshire and Mary Michael in joining the Lord. Father and son shared the same positive outlook on life. He is survived by: wife, Ann Michael of Jacksonville, Florida; children Nalini Babb (Roger (son-in-law), Parker (grandson) of Atlanta, Georgia, Dionne Hamilton-Christie (Leroy (son-in-law), Vanessa (granddaughter), Michael (grandson) of East Orange, New Jersey, Denise Entzminger (Everette (son-in-law), Destini (granddaughter), Devyn (grandson) of Jacksonville, Florida, Scott Michael (Rachel (daughter-in-law), Cody (grandson), Nevaeh (granddaughter) of Kingsport, Tennessee, Gabriel Michael of Augusta, Georgia and eleven sisters and six brothers in the Michael and Wiltshire family, friends, aunts, uncles, and cousins. He will be missed not only by his family but also by a host of close friends.

Dennis Edward Michael was born November 17, 1948 in Georgetown, Guyana to the late Edward Wiltshire and Mary Michael. While enjoying a stay with his son, Dennis Edward Michael answered God&#8217;s call to come home to rest on Saturday, May... View Obituary & Service Information

The family of Dennis Michael created this Life Tributes page to make it easy to share your memories.

Send flowers to the Michael family.