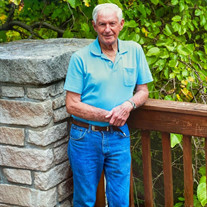 Click Here to View Livestream of the Funeral Service Fred Edward Bartley, Sr., 93, of Kingsport went to be with his Lord and Savior on Wednesday, March 24, 2021, at his residence. Fred was born on February 1, 1928, in Kingsport, TN to the late Robert and Faye Joyner Bartley. He was a proud veteran of the U.S. Army having served in World War II. After the military, Fred worked for his brother, R.C. Bartley, at ESSO 76 in Lynn Garden, and he then had a 35 year career with Mason Dixon from which he retired. After his retirement, he worked as a bus driver for Kingsport City Schools for 11 years and retired again. Fred then worked for his son, Freddie, for Bartley Enterprise in Kentucky for three years and then he completely retired and enjoyed traveling and many camping adventures with his wife and family. He was a member of Fort Robinson Baptist Church where he served as a deacon and was involved with various other committees. Fred was adored by his family, and he was a friend to so many. He always had a smile on his face, and he loved to laugh and to make others laugh. Fred had the biggest and kindest heart, and he will be dearly missed by so many. In addition to his parents, Fred was preceded in death by the love of his life and wife of 64 years, Jewell Bright Bartley; twin sister, Freeda Bartley McCloud; and his brothers, Pete, R.C., Curtis and Charles (Spot) Bartley. Those left to cherish Fred’s memory are his son; Freddie Bartley, Jr. (Gail) of Bowling Green, KY; daughters, BeLinda Meade (Randy) of Kingsport, TN and Lynne Bartley Coghill of St. Petersburg, FL; grandchildren, Charity Davis (Jimmy); Benjamin Meade (Brynna), Trey Bartley, Emma Bartley, Whitney Meade (Micheal Gilson) and Jasmine O’Dell (John Reynolds); great-grandchildren, Dustin Baker, Payslee Davis, Melrose Maine, Dashiell Meade, Aurora Meade, and Luna Reynolds; great-great-grandchildren, Ella Baker and Addie Baker; and his brother, Lowell Bartley (Jean) of Laurens, SC; several nieces, nephews, cousins and many friends. The family will received friends from 1:00 pm until 2:00 pm on Monday, March 29th, 2021, in the J. Wayne Hamilton Memorial Chapel of Oak Hill Funeral & Cremation Services. A Funeral Service will follow at 2:00 pm in the chapel with his son, Minister Freddie Bartley, Jr. officiating. His grandson, Benjamin Meade, will deliver the eulogy, and his granddaughter, Whitney Meade, will provide music. The service may viewed live at https://view.oneroomstreaming.com/authorise.php?k=1616797971107857 The Military Entombment Rites will follow in the chapel and will be under the direction of the American Legion Hammond Post # 3 and Gate City Post #265. The family respectfully requests those attending the service to wear a facial covering and practice social distancing. Fred’s family would like to extend a special thank you to John Hobbs, Phil Hoskins, Tim Vaughn, Paula Looney, Cindy Scott and the entire staff of Oak Hill Funeral Home for the special bond and friendship shown to their father. Memorial Contributions in Fred’s memory may be made to St. Jude Children’s Research Hospital by visiting, www.stjude.org To leave an online condolence for the family please visit www.oakhillfh.com The care of Fred Edward Bartley and his family has been entrusted to the staff of Oak Hill Funeral & Cremation Services.

[Click Here to View Livestream of the Funeral Service]https://view.oneroomstreaming.com/authorise.php?k=1616797971107857 Fred Edward Bartley, Sr., 93, of Kingsport went to be with his Lord and Savior on Wednesday, March 24, 2021, at his residence. Fred... View Obituary & Service Information

Click Here to View Livestream of the Funeral Service

Send flowers to the Bartley family.