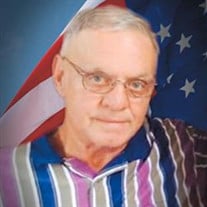 Gerald D. Gibson, 74, of Gate City, VA passed away Thursday, October 29, 2020, at his residence. He was born August 14, 1946, in Mount Holly, NC to the late George W. and Blondina Marshall Gibson. Gerald was a loving, caring and devoted husband,... View Obituary & Service Information

The family of Gerald D. Gibson created this Life Tributes page to make it easy to share your memories.

Send flowers to the Gibson family.