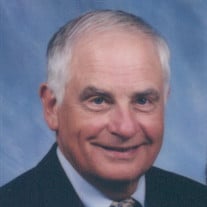 Harry Hill Holliman, 78, went to be with the Lord on Tuesday, July 7, 2020, at his home surrounded by his loving family after a lengthy illness with Idiopathic Pulmonary Fibrosis. He was born in Sulligent, Alabama to Jessie Hill Stokes Holliman and Roy Dexter Holliman and raised in the Vernon and Northport, AL areas prior to moving to Kingsport. Harry graduated from the University of Alabama with a Bachelor’s and Master’s in Chemical Engineering and served his country as a Chemical Officer in the US Army 1963-1965. He joined Eastman Chemical Company in 1966, as a chemical engineer and worked in several areas prior to retiring as President of Tennessee Eastman Division in 1999. Harry was honored as a Distinguished Engineering Fellow by the University of Alabama’s College of Engineering and Inducted into the State of Alabama Engineering Hall of Fame. He gave his life to his Lord and Savior, Jesus Christ as a young man and followed Him faithfully throughout his life. He was an active member of Colonial Heights Christian Church. Harry loved golfing and traveling to enjoy the game with his wife and friends. Favorite afternoons were spent on the back porch of his home with a Wall Street Journal or crossword puzzle. He is preceded in death by his parents and older brother, Charles. Harry is survived by his loving wife of almost 58 years, Wanda Hughes Holliman; daughter, Mary Lynn Holliman (Jason) Gray of Birmingham, AL; son Andrew David (Astrid) Holliman of Chattanooga, TN; and beloved grandchildren, Elijah, Jed, Noah and Keilah; sister, Mary Betts Williams (Gene) of Caledonia, MS; sister-in-law, Bonnie Holliman Morrow (David) of Huntsville, AL; and several nieces, nephews and friends. The Holliman family would like to send special thanks to Brighter Days Caregiver Services and Amedisys Hospice for their expert care and kindness. In light of COVID concerns, no services are being held at this time. Memorial contributions may be made to: Colonial Heights Christian Church, Second Harvest Food Bank, The Salvation Army, St. Jude’s or Big Oak Ranch Christian Home for Children The care of Harry Hill Holliman and his family has been entrusted to Oak Hill Funeral & Cremation Services.

Harry Hill Holliman, 78, went to be with the Lord on Tuesday, July 7, 2020, at his home surrounded by his loving family after a lengthy illness with Idiopathic Pulmonary Fibrosis. He was born in Sulligent, Alabama to Jessie Hill Stokes Holliman... View Obituary & Service Information

The family of Harry Hill Holliman created this Life Tributes page to make it easy to share your memories.

Harry Hill Holliman, 78, went to be with the Lord on Tuesday,...

Send flowers to the Holliman family.