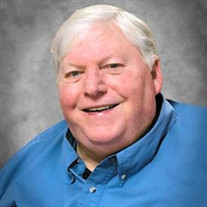 The service may be viewed live beginning at 6:55 pm - Click Here to View Service Harry (Hal) William Livergood II, 74 years old, went home to be with our Lord on Saturday, March 19, 2022, at home in Knoxville, Tennessee. Hal was born November 27, 1947 in Coral Gables, Florida. He was a member of University Baptist Church of Coral Gables until his work took him out of state. Hal was baptized at around age 12, and said University Baptist Church was responsible for teaching him about Salvation through Jesus Christ Our Lord and Savior and setting his walk with Christ for the rest of his life. Over the years Hal attended various Baptist churches where ever his work took him. He was a member of Grace Baptist Church in the Karns Community, Knoxville, Tennessee. One of the most important things to him was sharing his faith and the love of Christ with others. Hal was a member of the Free and Accepted Masons, Kingsport Masonic Lodge 688, and a member of the Knoxville Scottish Rite in the 32nd degree. Hal and Nancy were married on July 1, 1981, and were married nearly 41 years. He was a loving father to Sara, raising her as his own from the age of 6 years old. He loved his grandchildren, Nicholas, Sophia and Benjamin dearly. They were an important part of his life. He so loved his many family members in Kingsport and all over the country. Hal was an avid outdoorsman. He loved hunting and fishing, and spending time in the Everglades as a young man. He loved raising cattle and working on the farm and driving his John Deere tractor! He gained his love of the farm from his Uncle Conley Hurd. Hal’s work took him all over the country but he always considered Tennessee his home; Kingsport and most recently Knoxville for the past 30 years. Hal retired from Y12 in 2015. He loved his coworkers at Y12 as family and kept in touch with many of them. Hal was diagnosed with Prostate Cancer in 2008, and over the past 14 years underwent many treatments as options became available to combat the disease and extend his life. He was always grateful for the care he received from the many medical professionals he encountered during his Cancer journey. We want to especially thank Caregivers, Professional Case Management home nurses Jaleesa, Barbee and Elaine, and UT Hospice nurse Carol. We are thankful for the care and support received from UT Hospice. Special thanks to Hal’s lifelong friends, Jim Nall and A.J. (Junny) Pearson for all their care, love and support. Hal believed fervently in the power of prayer and was so grateful for all his prayer warriors. Hal is preceded in death by infant daughter, Shannon Lee Livergood; his parents Harry and Georgia, a brother and a sister; Survivors include; wife, Nancy Livergood; daughter Sara Addington; grandchildren, Nicholas Bellamy (Lezlie); Sophia Bellamy; Benjamin Bellamy; sister, Jean Sofo; brother, Dan Livergood; several nieces & nephews; and other special relatives & friends. Visitation will be held from 5 pm until 7 p.m., Friday, March 25, 2022, in the chapel of Oak Hill Funeral Home. A Celebration of Life Service will follow at 7 p.m. with Dr. Tiger Brooks officiating. Masonic Rites will be performed by Masonic Lodge #688. Graveside Services will be held at 12:00 noon on Saturday, March 26, 2022, at Oak Hill Memorial Park, 800 Truxton Drive, Kingsport, Tennessee 37660. Those attending are asked to meet graveside by 11:45 am. Honorary pallbearers will be Dan Livergood, Blake Livergood, Randy Livesay, Jimmy Maness, Dennis Shepard, David Reed, Delbert Reed, Jr., Jim Nall, A.J. Pearson, Carroll Hurd and Joey Fleming. Memorial contributions may be made to the Lynn Garden Baptist Church “Parking Lot Fund” at 301 May Avenue, Kingsport, Tennessee 37665. The care of Harry (Hal) William Livergood II and his family has been entrusted to Oak Hill Funeral & Cremation Services.

The family of Harry "Hal" Livergood II created this Life Tributes page to make it easy to share your memories.

The service may be viewed live beginning at 6:55 pm - Click Here...

Send flowers to the Livergood family.