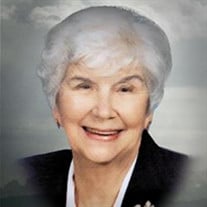 Hilda L. “Rita” Farthing, 96, of Kingsport passed away on Monday, May 10, 2021, at her residence. Mrs. Farthing was born in Cardiff, Wales, and she grew up there. She met the love of her life, William J. Farthing, during World War II when he was stationed in Cardiff while serving in the U.S. Army. They were married in 1945 in Cardiff, and she came to the US in 1946. Mrs. Farthing became an American Citizen in the 1960’s; as well, as obtaining her nursing degree. She loved being a nurse, and her daughter, Carol Lane, and granddaughter, Michelle Lane, followed her into the nursing profession. She was most proud of assisting Dr. Joseph Smiddy in establishing the fiberoptic bronchoscopy room at Holston Valley Medical Center, including giving the various scopes Welsh names. Prior to becoming a nurse, Mrs. Farthing was known for her skills as a seamstress. Her daughters and her daughter’s dolls were known for having the best and most stylish wardrobes in the neighborhood. When her children were young, she taught Sunday school at Ketron Memorial United Methodist Church, where she was a member for 60 years until her death. Mrs. Farthing was a Girl Scout leader, she enjoyed reading, playing the piano and enjoyed traveling across the United States with her family, from California to Maine and beyond. She loved her adopted country dearly. Mrs. Farthing was devoted to her pets: a mischievous cocker spaniel named Charles and a rescued silky terrier with an attitude named Cricket. Both predeceased Mrs. Farthing. After her retirement at the age of 70, she was a volunteer at Friends In Need. In addition to her husband of 64 years, William Farthing, she was preceded in death by her parents, Sidney Gatheridge and Florence Gatheridge; her daughter, Carol Lane; her only grandchild, Anthea Michelle Lane; nine brothers and sisters, Sidney Gatheridge, Edna Brown, Molly Dixon, Nancy Pond, Albert Gatheridge, Elsie Walton, Anthony Gatheridge, Rita Lindsay, and Peter Gatheridge. Those left to cherish Mrs. Farthing’s memory are her daughters, Linda Jane Farthing, of the home, and Billie Jo Farthing and husband, Douglas Sellars, of Johnson City; many nieces and nephews. A Funeral Service will be conducted at 2:00 pm on Thursday, May 13, 2021, in the J. Wayne Hamilton Memorial Chapel of Oak Hill Funeral Home with Rev. Joshua Swanson officiating. A Graveside Service will follow in the Masonic Garden of Oak Hill Memorial Park. Family and friends will serve as pallbearers. In lieu of flowers, the family requests donations be made to the Animal Shelter of Sullivan County, Inc., 380 Massengill Rd., Blountville, TN 37617, or the Sullivan County Humane Society, PO Box 922, Kingsport, TN 37662. To share condolences and memories with the family please visit www.oakhillfh.com The care of Hilda L. “Rita” Farthing and her family has been entrusted to the staff of Oak Hill Funeral & Cremation Services.

The family of Hilda Farthing created this Life Tributes page to make it easy to share your memories.

Send flowers to the Farthing family.