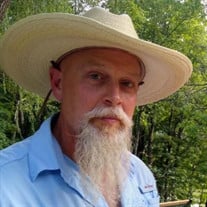 James Aaron Hamilton, loving son, brother, husband, and friend passed away Saturday, March 27, 2021, at his home in Blountville, TN. He lived a joyful life and was respected and loved deeply by many. His impact on those around him is evidenced by the countless stories remembered by those he touched. He was one-of-a-kind. James was born on April 25, 1967, to L.A. and Betty Hamilton of Kingsport, TN. He attended Science Hill High School. He loved sports and played football, basketball, tennis, and golf. He was also a member of the choir and swim team and won a scholarship for interior design in Home Economics. He went on to attend ETSU in 1985 and graduated with honors with a degree in Biology. After graduation, he married his wife, Lana, in 1990, in Cades Cove. James and Lana shared a love of the outdoors, visiting state and national parks, and helping others. He served as preacher at Pleasant View Church of Christ in Limestone, TN. Around the same time, he also began working outdoors digging trees, landscaping, and mowing. For a time, he worked for Glaxo Wellcome. He excelled and was soon awarded the Million Dollar Seller award, but began to question his career path. During this time, he also served as preacher for the Church of Christ in Wise, VA. He then decided to return to school where he received his Masters Degree in Psychology from ETSU in 2000. He began his teaching career at ETSU and was later tenured at Emory and Henry College. He was beloved by his students and colleagues alike. However, his love for the outdoors called him as he watched out his office window. After nine years of teaching, he started his own landscaping and mowing business. James had a strong moral compass that he used to guide every choice he made in his life and career. His passion for God and truth were foremost in his heart. He continually worked at bringing this belief to everyone he came in contact with. He had a love for people, for their physical, mental, and spiritual well-being. His desire and love for God were evident in his life, his walk, and his talk. He mastered the art of listening to the extent that he not only heard what was said but also grasped the meaning of what was not said. And once he heard, he was all in, whether it was your adventure, your lawn, your project, your joy, your pain, or your need. He offered advice and left off the sugar coating when necessary, and he always strove to follow through to resolution. James loved to run, swim, hike, fish, camp, bike, eat, and travel. He could decorate your house inside and out. He was a fashion icon with all of his hats, shoes, and shirts. He had a great singing voice. He gave wonderful hugs. He loved his siblings and knew he was blessed to have them in his life. He loved texting with his best friend, his father. And oh, how he loved to laugh and make others laugh (especially his mother!). He was an incredible storyteller, weaving with words hilarious accounts of ordinary events. Many of you reading this, no doubt, have laughed to tears over one or some of his stories. James is preceded in death by his paternal grandparents, Leland and Kathleen Hamilton, his maternal grandparents, Paul and Flora Broskey, and his wife, Lana Hamilton. He was devoted to Lana’s care constantly during her illness. He is survived by his parents, L.A. and Betty Hamilton of Kingsport, TN; sister, Karen and husband, W.C. “Steve” Stevens of Jonesborough, TN; brother, Paul and wife, Rachele Hamilton of Jonesborough, TN; sister, Deborah and husband, Cary Vantine of Kingsport, TN; nine nieces and nephews, one great-nephew; Tonya White, long-term coworker and close friend to James as well as Lana’s friend and caregiver. A private family Celebration of Life Service will be conducted at 7:30 p.m.Thursday, April 8, 2021, at Central Church of Christ, 2722 East Oakland Avenue, Johnson City, TN 37601. The Celebration of Life Service may be viewed live by visiting YouTube - www.YouTube.com/channel/UCvBDi9MI-aSYWxUOdD6Inow/videos Facebook - www.Facebook.com/CentralChurchJC audio live stream - Gracemine.org/resources/listen-live The Hamilton family would like to extend their deepest gratitude for the prayers and kindness offered during this time. In lieu of flowers, please donate your gift to the Dr. Allana Hamilton Memorial Scholarship Fund at http://www.tbr.edu/advancement/hamilton-scholarship . The care of James Aaron Hamilton and his family has been entrusted to the staff of Oak Hill Funeral Home & Cremation Services.

James Aaron Hamilton, loving son, brother, husband, and friend passed away Saturday, March 27, 2021, at his home in Blountville, TN. He lived a joyful life and was respected and loved deeply by many. His impact on those around him is evidenced... View Obituary & Service Information

The family of James Aaron Hamilton created this Life Tributes page to make it easy to share your memories.

Send flowers to the Hamilton family.