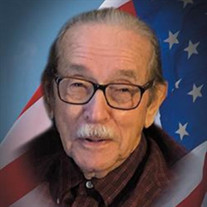 Psalm 116:15, “Precious in the sight of the Lord is the death of His faithful servant.” James Isaac “Rawhide” Hillman, age 91, of Mt. Carmel, TN became the guest of honor into the Homecoming Parade when he entered into the arms of his Heavenly Father on March 30, 2020. At the time of his passing, he was at home with his family after a long battle with dementia. He was born in Dungannon, VA and raised in Nickelsville, VA. He was a devoted and loving husband, father, grandfather and great grandfather. Isaac was a charter member of Higher Ground Baptist Church where he served faithfully. He was employed by Holston Army Ammunition Plant for 39 years. Prior to that, he had served his beloved country in the U.S. Army during the Korean War. During the time of his adult life, he found his greatest joy through worshiping God, spending time with his family, working in his garden and fishing with his grandchildren. He was preceded in death by his parents, Barnett and Nell Hillman, brother, Fred Hillman and infant sister, Clara O’Velma Hillman. Those left to cherish his memory include his devoted wife of 66 years, Joyce Kilgore Hillman of the home, daughter Carolyn Tuck and husband, Charlie of Kingsport, TN., daughter Trish Weaver of Johnson City, TN. and son, Brian Hillman of Mt. Carmel, TN and Nashville, TN. He is also survived by his grandchildren, Amber Vicars of Kingsport, TN., Adam Tuck of Hendersonville, TN., Lindsay Callaway of Johnson City, TN., David Tuck of Nashville, TN., and Lauren Tuck of Knoxville, TN. His special great grandchildren whom he loved so much are Kaleb Gilbert, Kloe Gilbert, Alex Vicars, Bella Waugh, Garrett Tuck, Ethan Tuck and Dylan Grace Tuck. He is also survived by his siblings, Robert Hillman, Sumpter, SC., Thomas Hillman, Nickelsville, VA., Robie Hillman, Sullivan Gardens, TN., Darris Faust, Bluffton, SC. and Jewell Waddell, Jonesborough, TN. He is also survived by several nieces and nephews. The family would like to extend a special thank you to the nurses and staff of Amedisys Hospice, especially to Teresa, Dana and Diamond who took such good care of our earthly father in support of our family until his passing. Due to current restrictions on group gatherings, there will be no immediate Funeral Service. A private family Graveside Service will be held at Church Hill Memory Garden with Dr. Phil Hoskins officiating. Serving as pallbearers, Brian Hillman, Adam Tuck, David Tuck, Kaleb Gilbert, David Vicars and Jason Callaway. A Memorial Celebration of his life will be held at a later date yet to be determined. In lieu of flowers, memorial contributions may be made to St. Jude Children’s Research Hospital, 501 St. Jude Place, Memphis, TN 38105. To leave an online condolence for the family please visit www.oakhillfh.com The care of James Isaac “Rawhide” Hillman and his family has been entrusted to the staff of Oak Hill Funeral & Cremation Services.

The family of James Isaac Hillman created this Life Tributes page to make it easy to share your memories.

Send flowers to the Hillman family.