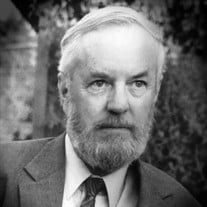 James M. Turnbull, MD, born May 12, 1938, died, at age 82, on March 6, 2021, still flirting with the love of his life, Sharon Turnbull (all while making sure no one else felt ignored!). He was blessed to be surrounded by vaccinated and masked loved ones in his last days and hours. He was preceded in death by his parents, Walter Turnbull and Margaret Minorgan-Turnbull, and his brothers, Stewart and Andrew. He is survived by his soul-mate Sharon, his siblings; Graham and Frances, his 5 children; Andrea, Philip, Liz, Sarah, and Laura, 9 amazing grandchildren, 2 great-grandchildren, and countless beloved relatives, in-laws and friends. Who would have imagined that Baby Jim, born in wartime England, was destined to become a citizen of three different countries (England, Canada, and USA)? At the ripe old age of 18 months, he was one of the children shipped to Canada as a war evacuee when England was being bombed by the Germans. In Canada, he was properly spoiled by his wealthy grandmother. When he finally returned to England after the war, he found his family larger by a few siblings. He was used to being an only child and didn’t adjust easily to his new position among many and acted out (naughty, cheeky little bloke!). His misbehavior led to him being sent off to private/boarding school. Though his parents weren’t wealthy, he was able to attend on scholarship and showed sufficient talent to earn a scholarship to attend St. Mary’s Medical School (now known as Imperial College). He passed his courses there with flying colors, amazingly, while working several side jobs, including as a stand-in/double and extra in several major films. After graduating, he heard the call to return to British Columbia, Canada. He began training as a general/family practitioner and later moved to open a practice in a beautiful small coastal town, Powell River, BC. Later, he returned to Vancouver to study to become a Psychiatrist. He received numerous teaching awards, served as officer in several professional associations, including the Tennessee Psychiatric Association. While completing his residency at Temple University in Pennsylvania, during a shortage of physicians serving in the Vietnam war, Jim (who was a foreign citizen) was drafted and served in the US Army. He taught medics at Fort Sam Houston how to handle psychiatric emergencies on the battlefield. Later, he became a US citizen and served in the local Army Reserve Unit. Whether he was serving as a physician, a university professor, a sought after lecturer, or medical director of a mental health organization, he was devoted to his patients, students, and co-workers. During his career, he touched many lives. Even his hobbies carried his mark - president of the dog park, avid gardener, library volunteer reader, tenor in the choir, and supporter of the arts in all forms. He lived a good life and will be missed. In lieu of flowers and a ceremony, the family requests donations to any charity that makes you think of any of Jim’s loves (Public Library, Local Dog Park or Humane Society, Mental Health and Domestic Shelters/Hotlines, aa.org, Local Orchestras, ETSU Friends of Music, Arboretum or Dept. of Psychiatry, NAMI, Hospice organizations, heifer.org,) Thank you for all of your love and prayers. To leave an online condolence for the family please visit www.oakhillfh.com The care of James M. Turnbull, M.D. and his family has been entrusted to the staff of Oak Hill Funeral & Cremation Services.

James M. Turnbull, MD, born May 12, 1938, died, at age 82, on March 6, 2021, still flirting with the love of his life, Sharon Turnbull (all while making sure no one else felt ignored!). He was blessed to be surrounded by vaccinated and masked... View Obituary & Service Information

The family of Dr. James M. Turnbull M.D. created this Life Tributes page to make it easy to share your memories.

Send flowers to the Turnbull family.