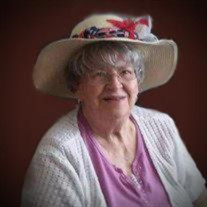 Jeannette Mae Chiasson Manning, 88, of Kingsport, entered into her rest, Friday, October 30, 2020, at her residence surrounded by her loving family. She was born in Brighton, MA, raised in Rochester, NH and had lived in Kingsport most of her life. Mrs. Manning served as a Sergeant in the U. S. Air Force during the Korean Conflict and that’s where she met her husband, Robert. L. Manning, Sr. She was a faithful member of the New Destiny Ministry Center. Mrs. Manning also served in nursing home and senior ministries with her late husband, Robert Manning while he was an associate pastor. She served several years as the Principal of Gospel Assembly Christian Academy, Kingsport, TN. She enjoyed reading her Bible every day, playing the piano and singing in church. Mrs. Manning was a loving wife, mother, grandmother, great grandmother, great-great grandmother, sister and friend. She was preceded in death by her husband, Pastor Robert L. Manning, Sr.; son, Scott Manning; daughter in law, Vickie Carrier Manning; mother Matilda Chiasson and eleven sisters and brothers. Those left to cherish her memory are her son, Terry Manning and wife, Robbin; son Robert L. Manning, Jr.; daughter in law, Mollie Manning; grandchildren, Celeste Hess and husband, Greg, Phillip Manning and wife, Jessica, Jeremy Manning, Pastor Jerrod Manning and wife, Chandra, Michael Manning and wife, Christy; “adopted” daughter, Sheila Jones, ten great grandchildren, two great-great grandchildren; several nieces and nephews. A private Military Graveside Service will be held at the V. A. Cemetery, Mountain Home, TN. A Celebration of Life Service will be held at a later date. In lieu of flowers, memorial contributions may be made to New Destiny Ministry Center, P. O. Box 683, Kingsport, TN 37662. The family would like to extend a special thank you to Caris Healthcare and Hospice Service and Sentinel Homecare for the kindness and love they have shown. The care of Jeannette Manning and her family has been entrusted to the staff of Oak Hill Funeral and Cremation Services.

Jeannette Mae Chiasson Manning, 88, of Kingsport, entered into her rest, Friday, October 30, 2020, at her residence surrounded by her loving family. She was born in Brighton, MA, raised in Rochester, NH and had lived in Kingsport most of her... View Obituary & Service Information

The family of Jeannette Chiasson Manning created this Life Tributes page to make it easy to share your memories.

Send flowers to the Manning family.