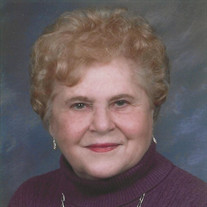 Mary Joan “Jody” Beck Powell passed away peacefully Tuesday, March 10, in Oak Ridge, TN. She was a member of First Broad Street United Methodist Church in Kingsport. Jody was born in Melvin, Illinois in 1929 and moved to Kingsport TN when she was six-months old. After her 1946 graduation from Dobyns-Bennett High School, she spent a short time as a secretary at Tennessee Eastman where she met and married her future husband, Sam Powell, Jr. After the birth of their daughter, Sherry, Jody became a stay-at-home mom, serving as Brownie Scout Leader, PTA home-room Mother, and Sunday School teacher. When Sherry entered Dobyns-Bennett, Jody began her 25-year career as teacher’s aide and bookkeeper in the Kingsport City School System. She became close friends with many of the teachers and staff at Sevier Junior High, Robinson Junior High, and the Central Office. After her retirement in 1990, Jody volunteered at the Palmer Center in Kingsport and First Broad Street United Methodist Church front office and Food Assistance Ministry. She and her husband, Sam, enjoyed traveling. Some of their favorite places were Alaska, the Canadian Rockies, Germany, Great Britain, and Hawaii, where they celebrated their 50th wedding anniversary. Jody spent her later years at Baysmont at Asbury Place in Kingsport, where she enjoyed renewing friendships with former Dobyns-Bennett classmates and reminiscing about the “good old days.” She moved to Canterfield of Oak Ridge in 2019 to be close to Sherry where she easily made new friends with her sense of humor and love of a good laugh. Jody’s family would like to thank the loving, caring staff at Canterfield who became an extended family to her. Jody was preceded in death by her husband of 58 years, Sam Powell, Jr., her father, Walter A. Beck, her mother, Imogene Edwards Beck, and several aunts, uncles, and cousins. She is survived by her daughter Sherry Lynn Powell Ketterer and her husband Harold and her granddaughter, Colonel DeAnna Lyn Ketterer, USAF, Ret. and her husband Eric Collier. Jody’s family and friends will miss her smile, quick wit, and gentle spirit. And Sherry will forever miss her mother’s unconditional love, support, and encouragement. Receiving of friends will be Saturday, March 14, 2020, at Oak Hill Funeral and Cremation Services in the J. Wayne Memorial Chapel, Kingsport, from 1:00 - 1:45 p.m. A Celebration of Life Service will follow at 2:00 pm with Rev. Jack Edwards officiating. A Service of Committal will follow at 2:45p.m in the Oak Hill IV Mausoleum. In lieu of flowers, memorials can be made to First Broad Street United Methodist Church, Scholarship Fund, 100 E. Church Circle, Kingsport, TN 37660; Aid to Distressed Families of Appalachian Counties (ADFAC), P.O. Box 5953, Oak Ridge, TN 37831-5953; or a charity of the donor’s choice. The care of Jody Powell and her family has been entrusted to the staff of Oak Hill Funeral and Cremation Services.

The family of Jody Powell created this Life Tributes page to make it easy to share your memories.

Send flowers to the Powell family.