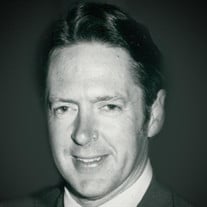 John Henry McNamara February 15, 1936 - March 3, 2022 John is best remembered as an amazing yacht captain and the best at storytelling – family and friends could listen to him all day describing his many boating adventures. John’s own unique story began 86 years ago. He was born on February 15, 1936, in South Bend, Indiana to the late John McNamara and his wife, Angela. One of six children, John grew up in a lively household near the Great Lakes where he developed a lasting passion for boating, received his early education at both private and public schools in South Bend and attended St. Joseph’s College in Rensellaer, IN. After college, he proudly served his country in the U.S. Army Artillery during the Cold war and went on to earn a Master Captain’s license from the U.S. Coast Guard. For the next 35 years, John was a “man on the move”. He hailed from South Florida where he was a boat captain for private motor and sailing yachts cruising from Miami to the New York and Massachusetts coasts, as well as to the islands of the Bahamas. He also delivered yachts and small commercial vessels along the U.S. East/Gulf coasts, Bahama Islands and Mexico. Additionally, John worked as watch captain in offshore petroleum industry supply and towing vessels. Upon retirement in 2006, John and his wife, Connie, moved to Gray, Tennessee to be close to family and enjoy the beauty of their small farm in the foothills of the Blue Ridge Mountains. John appreciated other things, too, such as classic cars and historical buildings. He had an impressive collection of cars and was a member of The Association for Preservation Technology. Most importantly, John appreciated the importance of family. He was a beloved husband, son, brother and uncle. He is preceded in death by his parents, John and Angela McNamara, and brother, Jim. Surviving are his wife of 52 years, Constance “Connie” (Von Bramer); siblings, Patrick and his wife, Chikako of Alameda, CA, Angela O’Brien and her partner, Robert Greene of Bradenton, FL, Mary Daugherty and her husband, Jim of East Lansing, MI, and Cynthia Brosnan and her husband, Mike of Dowagiac, MI. He is also survived by several nieces, great-nieces and nephews. A Funeral Mass will be given March 17, 2022, 11:00 am at St. Dominic Catholic Church in Kingsport with Father Michael Cummins officiating. The family extends special thanks to Nurse Carolyn Thompson and staff at Life Care Center of Gray and the caring nurses at Johnson City Medical Center. In lieu of flowers, memorial contributions may be sent to NE TN/SW VA Alzheimer’s Association, 2319 Browns Mill Rd., Ste. D6, Johnson City, TN, St. Dominic Catholic Church, 2517 John B. Dennis Hwy, Kingsport, TN 37660, or St. Joseph Catholic Church, 226 N. Hill St., South Bend, IN 46617. To share memories and condolences with the family please visit www.oakhillfh.com The care of John Henry McNamara and his family has been entrusted to the staff of Oak Hill Funeral & Cremation Services.

John Henry McNamara February 15, 1936 - March 3, 2022 John is best remembered as an amazing yacht captain and the best at storytelling &#8211; family and friends could listen to him all day describing his many boating adventures. John&#8217;s... View Obituary & Service Information

The family of John Henry McNamara created this Life Tributes page to make it easy to share your memories.

Send flowers to the McNamara family.