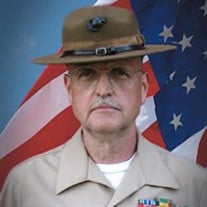 Kenneth “Ken” Lane, MGySgt, USMCR, (Ret.), 71, of Kingsport, passed away Friday, June 12, 2020, at his home in Kingsport from complications from ALS. He was the son of Elijah H. Lane Sr. and Edith Williams Lane. In addition to his parents, he was preceded in death by his brother, “E.H.” Lane Jr. Ken graduated from Blountville High School in 1967 and from East Tennessee State University with a Degree in Business Administration. He retired as a Team Manager from Eastman Chemical Co. after more than 34 years of service, having worked in Acid and Polymer Divisions. Ken married Carolyn “Carol” Burke on March 24, 1969. Ken was a loving husband, father, and grandfather. He enjoyed spending time with his grandchildren and he and his wife attended Bays Mountain Baptist Church. Ken was a veteran of the United States Marines, U.S. Army Reserve, (Drill Sgt. 80th Div. Bristol, VA.), and retiring from the U.S. Marine Corps Reserve with over 30 years total military service. His tours of duty include serving one year in Vietnam with 1st Marine Div., serving stateside during Operation Desert Storm and being deployed to Fallujah, Iraq, for seven months during Operation Enduring Freedom (2005) as a member of the 5th Civil Affairs Group. Ken was involved in competitive shooting locally and nationally both as a civilian and as an 18-year member of the Marine Corps Reserve Pistol Team earning “Distinguished” Pistol Shot and “Distinguished” Rifleman. He was also a member of the “President’s 100” in both Rifle and Pistol. Ken was a life member of the Marine Corps Distinguished Shooters Association and Cherokee Rod & Gun Club, Kingsport, TN; and a member of Kettlefoot Rod & Gun Club, Bristol, VA. He is survived by his wife Carol of 51 years; his son, Matthew Lane and wife Stacie; grandson, Wyatt; granddaughter, Graycie; sisters, Virginia Greene and husband Johnny and Harriett Sensabaugh; brothers, Randal Lane and Jonathan Lane; several nieces and nephews. The family will receive friends from 4:00 – 6:45 pm Tuesday, June 16, 2020, at Oak Hill Funeral and Cremation Services in the J. Wayne Hamilton Memorial Chapel. A Celebration of Life Service will follow at 7:00 pm with Pastor Tim Nelson of Bays Mountain Baptist Church, officiating. A Eulogy will be given by Ken's daughter in law, Stacie Lane. Military Graveside Honors will be conducted 12:00 noon, Wednesday, June 17, 2020, by the United States Marine Corps Honor Guard at Oak Hill Memorial Park in the Garden of Meditation. A Committal Service will follow with Pastor Tim Nelson officiating. Pallbearers will be, Tom Murray, Daryl Castle, Eldon Wilson, Mark Steadman, Bill Morgan, Ron Riggs, David Horne, and Harvey Riner. Honorary Pallbearers will be Curt Briggs, Terry Payne and special Marine Corps “Shooting Buddy” Gene Pitts. Family and friends are asked to meet at the cemetery at 11:50 am. Memorials may be given to the Tri-Cities Walk to Defeat ALS (Ken Lane’s ALStars), web.alsa.org/tricitiesTN or Bays Mountain Baptist Church, 2000 Meadowview Parkway, Kingsport, TN 37660. The family wishes to extend our sincere thanks to Amedisys of Kingsport, TN, with special thanks to Becky, Jodi and Courtney, and Providence Companion Care, Johnson City, TN, with a special thanks to Yulia and Brittany for all of the kind and compassionate care that was shown to Ken and his family during their time of need. These ladies were truly a blessing to our family. The care of Kenneth Lane and his family has been entrusted to the staff of Oak Hill Funeral and Cremation Services.

The family of Kenneth D. Lane created this Life Tributes page to make it easy to share your memories.

Send flowers to the Lane family.