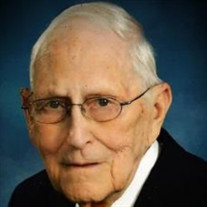 Not sure what to send?

M. Charles “Charlie” Lambert departed from this life on Sunday, April 3, 2022, at the age of 98. Charlie was born December 10, 1923, in Oklahoma City, Oklahoma to loving parents, Bernice Leil Pierce Lambert and Mervin Davis Lambert. He grew up with his younger brother, James Pierce Lambert. Charlie graduated from William Penn High School in York, Pennsylvania before attending Duke University, where he played clarinet in the band, was a member of Kappa Sigma Fraternity, and then graduated in 1944. Charlie married the love of his life, Janet Sultner, on June 8, 1944. They raised their two children, Steven Charles Lambert and Deborah Lambert Germany, in Kingsport, Tennessee, where Charlie worked as Director of Employee Benefits at Tennessee Eastman Kodak. Charlie was active in the Kingsport community, serving as a member of the Lions Club and especially enjoyed his role as Treasurer of the Turtle Derby. He received the Lion of the Year Award, the Lion of the Decade Award, and the Melvin Jones Award from Lions Club International. Charlie was also an active member of First Broad Street United Methodist Church in Kingsport for 78 years, serving on the Board as Treasurer and working with his wife, Janet to weekly produce and mail the church’s newsletter. In 2013, Charlie moved to Asbury Place Baysmont. There, he participated and led many of the activities available to residents, including the weekly Vespers, Wine Club, Bingo Night, and any event where dancing was involved. Charlie was everyone’s friend. He was incredibly kind-hearted, generous, encouraging, and was a doting husband, father, grandfather, and great-grandfather. He was most happy when he was doing something thoughtful for someone else, and especially loved to take his family shopping so they could pick out “something special” when they came to visit. Charlie was the proudest of Duke Blue Devils, cheering vehemently for Duke’s basketball team and spending his last night here on earth watching Coach K’s final game. Charlie is survived by his daughter, Debbie Lambert Germany of Natchez, Mississippi (husband, Forrest Germany); grandson, Chase Hudson of Alexandria, Virginia (wife, Erin Hudson); granddaughter, Shelley Carter of Hinsdale, Illinois (husband, Cason Carter); grandson, Charlie Lambert of Herndon, Virginia; granddaughter, McKaye Darling (husband, Scott Darling); and great-grandchildren, Cassidy Hudson, Luke, Henry, and Jacob Carter, Aniston, Bennett, and Campbell Darling. He was preceded in death by his wife, Janet Sultner Lambert and son, Steven Charles Lambert. Special thanks from his family to his long-time care giver and friend, Linda Miller. The Memorial Service will be held May 28, 2022, at 2:00 pm at Asbury at Baysmont. Due to Covid-19, masks are required for those attending. Memorial Contributions may be made to, First Broad Street United Methodist Church in Kingsport or to the M. Charles and Janet S. Lambert Scholarship Fund at Duke University. To share memories and condolences with the family please visit www.oakhillfh.com The care of M. Charles “Charlie” Lambert and his family has been entrusted to the staff of Oak Hill Funeral & Cremation Services.

The family of M. Charles "Charlie" Lambert created this Life Tributes page to make it easy to share your memories.

M. Charles “Charlie” Lambert departed from this life on Sunday,...