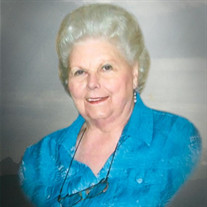 Mrs. Madeline W. Murray passed away peacefully on Easter Sunday, April 17, 2022, at the age of 92. Madeline was an “Appalachian Girl” through and through. Born in Madison Heights, VA (according to her, “the hills near Lynchburg”) during the Great Depression in 1930 to Ted and Gracie Cash Wooldridge, who along with all her siblings preceded her in death. She was a young bride who fell in love with a former Capitol police officer, Malcolm Kidwell Murray, who had returned from serving our country in the Army during WWII. They married in 1945 until Malcolm’s passing in November 1999. Madeline lived the majority of her life as a resident of Kingsport, TN. Madeline was the mother of Joan Gail Murray Hughes (of Baytown, TX) and Tom Randolph Murray (of Kingsport, TN). Both of Madeline’s children were honored to have her as their mother who was beautiful to behold, which was only excelled by her beautiful spirit. They were proud to be her children; and Madeline truly cherished being a young wife, mother, and later a grandmother and great-grandmother. Madeline will always be remembered for her beautiful smile, genuine laugh, salty sense of humor, and outgoing personality. She truly never met a stranger and could easily talk to anyone, and make that person feel comfortable and at home. By the same token, if she didn’t like someone, there was no mistaking her feelings. Madeline was well loved by her family, friends, and her caregivers who later stated she “was one of the good ones.” Some of Madeline’s last words were: “Nothing matters more in life than to be surrounded by a family who loves you and is praying for you.” Madeline is survived by daughter Mrs. Joan Gail Murray Hughes and husband Dr. Bobby H. Hughes of Baytown, TX; son Mr. Tom R. Murray and wife Mrs. Deborah Arnold Murray of Kingsport, TN; granddaughter Kelli Church Dilling and husband Michael B. Dilling of Missouri City, TX, and of Kingsport, TN granddaughter Valerie Murray Hopson and Keith Hopson, grandson Randolph “Randy” Arnold Murray and wife Ronea James Murray. Madeline and Malcolm were blessed with 4 great grandsons: Austin Michael and Alexander Robert Dilling of Missouri City, TX; Ethan James and Dylan Jacob Murray of Kingsport, TN. Go Rest High on that Mountain, Mother / Grandma Murray! The Graveside Service will be conducted Wednesday, April 27, 2022, at 3:00 pm at Oak Hill Memorial Park. In lieu of flowers, and if a loved one wishes to make donations, please consider donating to the Historic Old Kingsport Presbyterian Church, 2049 Greenway St, Kingsport, TN 37660 in Madeline’s memory, which was next door to the family homestead for the many years Malcolm and Madeline resided there. Or, donations can be sent to Faith Presbyterian Church, 3900 N. Main, Baytown, TX 77521. To share memories and condolences with the family please visit www.oakhillfh.com The care of Madeline W. Murray and her family has been entrusted to the staff of Oak Hill Funeral & Cremation Services.

The family of Madeline Murray created this Life Tributes page to make it easy to share your memories.

Send flowers to the Murray family.