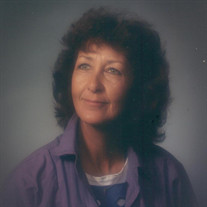 Ruth Marie Manis, 76, of Kingsport, passed away on Monday, May 25, 2020, at the home of her daughter who has been by her side through her whole journey. Ruth worked at Munal Clinic and Holston Valley Hospital as an LPN for many years. She retired from the Hardware Department at Sears. Ruth then went back to nursing, volunteering her time at Friends In Need then later, returned as an employee where she retired. Ruth enjoyed lots of things including watching Gospel programs on her big screen TV, spending time with her family, working in her yard and she especially enjoyed her son-in-law, Tim’s grilled hamburgers but her greatest joy in life came by spoiling her great-grandson, Jaxson. Ruth was the daughter of the late Albert and Mollie Flynn of Kingsport. She was also preceded in death by her two day old son, Gale Ransom Manis III who passed away in 1966; the father of her children, Gale Ransom Manis; sisters, Louise Davis and Gay McGrady both of Kingsport; two infant brothers who died at birth. Survivors include her daughter and son-in-law, Angela Cox (Tim) of Kingsport; brother, B.G. Flynn (Esther); sister, Peggy Barnett; grandson, Brian “Scott” Shaw; great-grandson, Jaxson Scott Shaw all of Kingsport. The family will receive friends Thursday, May 28, 2020, from 4:00-5:00 pm at Mercy Seat Ministries. A Celebration of Life Service will begin at 5:00 p.m. Her grandson, Scott will deliver the eulogy and music will be provided by Landon Bellamy. In lieu of flowers, contributions can be made to Mercy Seat Ministries, 2315 E. Center Street, Kingsport, TN 37664 or P.O. Box 7760, Kingsport, TN 37664. Angela would like to give a special thanks to Tim Cox and Peggy Barnett for all the help they have given over the past three years during Ruth’s illness. Also, our extreme gratitude is extended to the staff of Amedisys Hospice for their compassion and care. The care of Ruth Marie Manis and her family has been entrusted to the staff of Oak Hill Funeral & Cremation Services.

Ruth Marie Manis, 76, of Kingsport, passed away on Monday, May 25, 2020, at the home of her daughter who has been by her side through her whole journey. Ruth worked at Munal Clinic and Holston Valley Hospital as an LPN for many years. She... View Obituary & Service Information

The family of Ruth Manis created this Life Tributes page to make it easy to share your memories.

Ruth Marie Manis, 76, of Kingsport, passed away on Monday, May...

Send flowers to the Manis family.