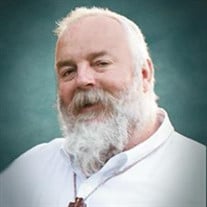 Click Here to view the LiveStream of the Celebration of Life Service Terry Lynn Lane, 59, of Kingsport passed away peacefully on Thursday, February 11, 2021, at his home with his family by his side. Terry was born on April 12, 1961, in Kingsport, TN. Being the youngest of four sons he was definitely a ‘mamas’ boy. He was also a caring brother, husband, father and friend but mostly he loved the role of “Pop Pop”. As a lifelong resident of Kingsport he spent his early years at the Boys Club where his mother and father ran the canteen. It’s there he developed a love of all sports - especially soccer. He was a gifted athlete who played everything well. He was one of the original Kingsport Youth Soccer Association (KYSA) Cosmos coached by Claudio Carlin. The Cosmos were Four-time State Runner Up. 1980 State Champs & Regional Runner Up. They played and beat many college and men’s amateur teams. He was also part of the Dobyns Bennett ‘Big Red Machine’ Big 9 Champs of the late 70s. Terry had a passion (and talent) for cooking and serving and sharing his love for Christ. He used those talents on mission trips, Emmaus Walks, and various places of need. He had a great big heart and a vibrant personality that loved to laugh and chat with everyone he met. He spent the majority of his working life in the automotive industry but in recent years he turned his culinary skills into a secondary vocation to cook at Food City. While there he was twice awarded the Claude P. Varney Award for Volunteerism. He enjoyed camping & fishing with friends and family. He had a green thumb and loved working in his flowers. Some of his most rewarding times were coaching his sons in sports where lifelong friendships were made with the kids and parents alike. Terry was preceded in death by his father, Hobert P. Lane and his brother, David Lane. Those left to cherish his memory are his wife of thirty-seven years, Kimberly Cox Lane; sons, Jesse Patton Lane and wife, Shelby, Dalton Lane and wife, Jill, and Carson Lane; grandchildren, Fletcher, Wheeler, Quentin and Conner; mother, Lena Grace Lane; brothers, Ronnie Lane and Mike Lane; sister-in-law, Judy Lane; nieces and nephews, Josh Lane (Johna), Alison Rodgers (Adam) and Nicki Scott (Jason); and a host of friends. A Celebration of Life Service will be conducted at 2:00 pm on Thursday, February 18, 2021, in the J. Wayne Hamilton Memorial Chapel with Pastor Ralph Kidd officiating. The Celebration of Life Service may be viewed online by visiting https://www.oneroomstreaming.com/view/authorise.php?k=1613592603101309 The family will receive friends immediately following the service in the chapel. The family respectfully requests those attending the visitation and service to please wear a mask and practice social distancing. In lieu of flowers, memorials may be made to the Mafair United Methodist Church Mission Fund, 1409 E. Center St, Kingsport, TN 37664 or Shades of Grace United Methodist Church, 313 E. Sullivan St., Kingsport, TN 37660. To leave an online condolence for the family please visit www.oakhillfh.com The care of Terry Lynn Lane and his family has been entrusted to the staff of Oak Hill Funeral & Cremation Services.

[Click Here to view the LiveStream of the Celebration of Life Service]https://www.oneroomstreaming.com/view/authorise.php?k=1613592603101309 Terry Lynn Lane, 59, of Kingsport passed away peacefully on Thursday, February 11, 2021, at his home... View Obituary & Service Information

Click Here to view the LiveStream of the Celebration of Life...

Send flowers to the Lane family.