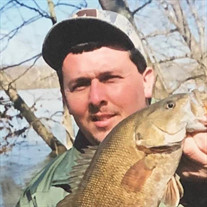 Todd Daniel Woods, 54, of Kingsport, took his final adventure on Monday, May 18, 2020. The Master of all is giving him the grand tour of the fullest streams, surrounded by a majestic wilderness. Because of his faith, he struggles no more. Todd was born to Tom and Juanita Woods on December 27, 1965, in Kingsport, TN. When he was young, his family called him, “Todd, Todd the fishin rod”. He was marked for life to explore the outdoors. From the time he could walk, he would retrieve ducks on a hunt or gather night crawlers for the next fishing trip. Frog “giggin”, archery, hunting, trapping, fishing…etc… he was avid about it all, and he had a passion to teach others his skills. His love for nature was contagious and he passed this on to his daughter, Ashton; his son, Jacob; his nephew, Andy; and his son-in-law, Josh. Todd was a “people person” full of love and fun to be around. After graduating from Sullivan North High School, he worked at Mead Paper Mill. His love for animals led him to board and train dogs. Todd also hosted a local hunting and fishing television show for a period of time. Out of all of his accomplishments, his most treasured were his children. Todd was a loving father, son, brother and friend. Todd was preceded in death by his father, Thomas D. Woods; grandparents, Clarence and Carrie Mae Johnson and Woody and Georgia Woods; brother-in-law, Les Frazier; nephew, Dane Countiss; as well as several aunts and uncles. Those left to cherish Todd’s memory are his daughter, Ashton Woods-Lawson (Josh); son, Jacob Daniel Woods; mother of his children, Kelly Woods; mother, Juanita “Grando” Woods; sisters, Tonya Winkle (Mike), Teresa Countiss (David), Tana Frazier, and Toma Moore (West); nieces and nephews, Mika Davenport (Josh) and Tanner, Andy Winkle (Ashley) and Landree, Lauren Frazier; Chase Countiss, Weston and Caeden Moore; many extended family members and friends. A Celebration of Life Service will be held at a later date due to the current situation with COVID-19. Private services will be held to honor Todd. The family would like to thank the staff at Holston Valley Medical Center for providing exceptional patient care and support during a difficult time. Genesis 10:9,”He was a mighty hunter before the LORD” Now we say, “Go Rest High On That Mountain.” The care of Todd Daniel Woods and his family has been entrusted to the staff of Oak Hill Funeral & Cremation Services.

Todd Daniel Woods, 54, of Kingsport, took his final adventure on Monday, May 18, 2020. The Master of all is giving him the grand tour of the fullest streams, surrounded by a majestic wilderness. Because of his faith, he struggles no more. Todd... View Obituary & Service Information

The family of Todd Daniel Woods created this Life Tributes page to make it easy to share your memories.

Send flowers to the Woods family.