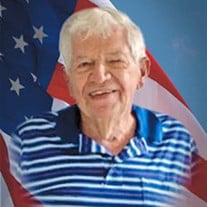 Wayne McKenzie, 91, entered eternal rest November 3, 2021, at his lifelong home in Kingsport. He was born October 8, 1930, to Lillian Jayne McKenzie and Samuel McKenzie. Wayne lost his parents early but was blessed to grow up with beloved cousins and extended family in the Bell Ridge community. He attended Sullivan West High School and served in the U.S. Air Force before starting work at The Kingsport Press, where he met and married Hilda Kirk in 1955. Wayne worked tirelessly at the Press to provide for his family, and any time off he also committed to making a better life for them. He was the most devoted of husbands, fathers, and grandfathers, and a friend of every animal except snakes. He loved with all his heart and was deeply loved in return. Wayne was preceded in death by his parents, Samuel and Lillian Jayne McKenzie. He is survived by his loving wife of 66 years, Hilda Kirk McKenzie, daughters Stacey McKenzie Means (Robert), Jetta McKenzie Pyatt (Billy), Dana McKenzie Flowers (Bobby), and grandchildren Casey, Robert, and Patrick Means. Services will be private due to COVID-19 concerns. Interment will be at Morrison Chapel United Methodist Church Cemetery, near his parents. Pastor Jeff Strong will officiate. In lieu of flowers, memorial contributions gratefully accepted to the Salvation Army, 505 Dale Street, Kingsport, TN 37660 or Morrison Chapel United Methodist Church, 2019 Chapel Drive, Kingsport, TN 37665. “And now these three remain: faith, hope, and love. But the greatest of these is love.” To share memories and condolences with the family please visit www.oakhillfh.com The care of Wayne McKenzie and his family has been entrusted to the staff of Oak Hill Funeral & Cremation Services.

Wayne McKenzie, 91, entered eternal rest November 3, 2021, at his lifelong home in Kingsport. He was born October 8, 1930, to Lillian Jayne McKenzie and Samuel McKenzie. Wayne lost his parents early but was blessed to grow up with beloved... View Obituary & Service Information

The family of Wayne McKenzie created this Life Tributes page to make it easy to share your memories.

Send flowers to the McKenzie family.