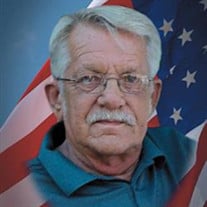 William Hubert Baker, Jr., 68, of Kingsport, took his final sail to Heaven on Thursday, August 13, 2020, at his residence surrounded by his loving family. Bill was born on April 25, 1952, in Mullins WV, to the late William Hubert Baker, Sr. and Louise Porter Durham Baker Caudill. He was raised in Atlantic Beach, Florida. Moved to Kingsport in 1979 where he began working for Cox Oldsmobile Dealership Body Shop till, they closed in the early 1990’s. Bill proudly served his country stationed at Mayport, Florida in the United States Navy from 1972 to 1976 and then Reserves from 1982 to 1986. He was A Vietnam vet and received several medals and honors for his service aboard the USS Franklin D Roosevelt aircraft carrier. Bill was former owner/operator of B&B Auto Collison and was presently employed at Millennium Auto Collision Repairs for last 16 years owned by his daughter and son in law Charles, serving the community alongside his family doing what he loved. He enjoyed NASCAR, hunting, fishing, motorcycles, boating, restoration of antique show cars and loved spending time with his family. He loved the Ocean and enjoying a medium rare steak, with crab legs, lobster and shrimp. He was a legend Larger than life to all who knew him. There was not one thing he could not build, fix or operate. His sense of humor and personality filled any room with love and laughter. In addition to his parents, Bill was preceded in death by his Stepfather Bob Caudill, brother, Jefferson Eugene “Mutt” Baker; sisters, Brenda Kay Baker Jones and Mary Eleanor Baker. Those left to cherish Bill’s memory are his loving wife of 16 years, Robin Grindstaff Baker; daughter, Cassandra (Cassie) Leigh Honaker husband (Charles). Charles and Bill had a special bond working together since 1990 where they met at Cox Olds. Grandchildren, Chaz Honaker ,wife (Ashley), Cody Honaker wife (Emily), Carrigan Honaker, Camden Honaker; great- grandchildren, Cadence Honaker, Callie Honaker, Colton Shaffer, Lincoln Shaffer; His childhood and lifelong friend Teresa Brown, the mother of his daughter and her husband Mike, a special friend. A Godson David Grodsky of San Francisco Ca. Step-children, Brad Necessary, Brandon Necessary (Marlena), step-grandchild; Daniel Necessary, siblings, Guy Scott Caudill of St. Augustine, Fl, Bobby “Junebug” Caudill of Jacksonville, Fl, Bobbie Rew of Ponte Vedra Beach, FL, Sue Ficklin, Jacksonville Beach, FL, Guyanna Bollinger of Morganton, NC, Pam Steward, of Senatobia, Rhonda Covey of WV; special sister- in- law, Carol Baker of Rayville, LA; two sisters in law Bobbie Moyer and Peggy Lee of Sandusky OH; two brothers-in laws, Bobby Grindstaff and Gary Hicks of Bristol, TN. Brother in laws he grew up with Ronnie and Larry Haynes. Bill had a huge heart and was a dad and grandfather to many children not biologically his. God gave Cassie a Brother Dustin Street who Bill raised as his own for over decade of which gave Bill two granddaughters Shyla and Paisley, a sister and lifelong friend Leslie Miller questionably his angel child lol, and his sweet girl Jillian Francisco Earhart, whose dad Greg Francisco was a close dear friend. We would like to give special Thanks to his hospice nurses, Jackie and Teana. To the family’s lifelong friend Tina Reed who were there to answer our calls all hours and rush to our side. His daughter Leslie who became a rock in the final days and helped hold us together caring and comforting Bill to the end. Cassie’s best friend, Carla who kept the family fed who Bill adored her cooking especially low country boils. A huge thank you to Teresa, Cassie’s mother who loves Robin like a sister and showed how God’s grace works and how Blended families should support and love one another. God sends you who you need always. The family will receive friends from 12:00 noon until 2:00 pm on Tuesday, August 18, 2020, in the J. Wayne Hamilton Memorial Chapel of Oak Hill Funeral & Cremation Services. A Celebration of Life Service will follow at 2:00 pm with Rev. Barry Reed a lifelong family friend and Pastor David Salley officiating. Bill took a quick liking to Pastor David because they had a love for riding motorcycles in common. Military Graveside Rites will follow in Oak Hill Memorial Park - Masonic Garden and will be conducted by The American Legion Hammond Post #3 and Gate City Post #265. Pallbearers will be Leon Matthews, Guy Scott Caudill, Chaz Honaker, SFC Cody Honaker, Camden Honaker, Jay Duncan, Joe Necessary, Tony Hines. Honorary Pallbearer is Son in Law Charles Honaker Jr. In lieu of flowers, memorial contributions may be made to the charity of one’s choice. Online condolences may be shared with the family by visiting www.oakhillfh.com The care of William Hubert Baker, Jr. and his family has been entrusted to the staff of Oak Hill Funeral & Cremation Services.

William Hubert Baker, Jr., 68, of Kingsport, took his final sail to Heaven on Thursday, August 13, 2020, at his residence surrounded by his loving family. Bill was born on April 25, 1952, in Mullins WV, to the late William Hubert Baker, Sr.... View Obituary & Service Information

The family of William "Bill" Hubert Baker Jr. created this Life Tributes page to make it easy to share your memories.

Send flowers to the Baker family.