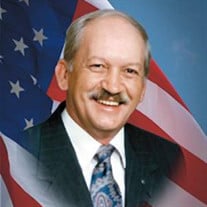 William Arthur McReynolds born Dec. 15, 1941, received his “Victory in Jesus” on March 10, 2021, after a long battle with cancer. William asked during his final days, “What would it be like if everyone loved the Lord and each other?” Now he knows because of Jesus! William graduated from Gate City High School in 1961. He then served in the US Navy for 4 years 3 months and 25 days. After his service to our Country, he worked at Eastman for 31 years, retiring January 1, 1997. During his retirement, “the best job he ever had,” he enjoyed RVing. He put out a garden every year and loved to watch it grow. He worked every day keeping Mary’s Burger King uniforms laundered and making sure supper was ready when she came home. He attended Crossroads United Methodist Church where he was a founding member of “old crow row.” There he sat every Sunday with his buddies, Bill Baker and Gary Yankee. William was preceded in death by his parents, Oakley and Etta McReynolds and grandson, Zachery Gillenwater. William is survived by his wife of 38 years, Mary Katherine; three children, Doug, Veronica Gillenwater (Chuck) and Stephen Ferguson (Kendra); sisters, Shirley Strong (Clive), Joyce Williams (Jim), Marilyn Wampler (Bill); brother Bob McReynolds (Gay); mother and father-in-law, Harold and Minnie Dunn; sister-in-law, Rhonda Light (John); brother-in-law, Wayne Dunn (Starla); five grandchildren, Hunter McReynolds (Crystal), Colton, Austin (Brooke), Mahaley and Luke Gillenwater; four great grandchildren, Axton, Ellie, Asher, and Jett Elliot; fur baby, Buster Mac and grand-dogs, Rockford and Sirius Black . The family will receive friends Tuesday, March 16, 2021, from 5:00-7:00 pm in the chapel of Oak Hill Funeral Home. A Military Graveside Service will be conducted by the American Legion Hammond Post #3 and Gate City Post #265 on Wednesday, March 17, 2021, at 2:00 pm at Mountain Home National Cemetery, Mountain Home, TN. Those attending the Graveside Service are asked to meet at the cemetery no later than 1:50 pm. The VA Administration requires facial coverings and attendees must practice social distancing. To leave an online condolence for the family please www.oakhillfh.com The care of William Arthur McReynolds and his family has been entrusted to the staff of Oak Hill Funeral & Cremation Service.

The family of William Arthur McReynolds created this Life Tributes page to make it easy to share your memories.

Send flowers to the McReynolds family.