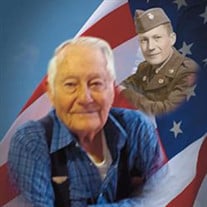 William “Bill” Porter, 91, of Gray, TN went to be with the Lord Wednesday, April 22, 2020. He was born April 28, 1928, in Castlewood, VA to the late David and Ada Artrip Porter. Bill was a loving and generous man whose greatest joy in life came by spending quality time with his family. He enjoyed gardening, fishing, home building and was an avid story teller. Mr. Porter was a committed Christian. He was a member of Litz Manor Baptist Church and former member of Buffalo Ridge Baptist Church where he taught the Junior Boys Sunday School Class. Bill was a member of The Korean Veterans Association, Sinking Creek Masonic Lodge #575 for over fifty years where he was a 32nd Degree Mason and The Jericho Shrine Temple, Blountville, TN. He retired from the Holston Defense Corporation as an electrician following thirty-five years of service. Bill was a proud veteran of the U.S. Army having served during the Korean War where he obtained the rank of Corporal. He was a member of the 15th Regiment Infantry Branch/ 3rd Division known as the “Can Do” Regiment. In addition to his parents, he was preceded in death by his siblings, Clyde Porter, James Paul Porter, John Porter, Thelma Armstrong and Dorothy Thomas. Those left to cherish his memory are his loving wife of sixty-six years, Ella Marie Porter; children, Pamela Porter Elam (Tommy), Patty Porter Deaderick, William Porter II (Cory) and Cindy Porter Phipps; grandchildren, Colton and Kaleigh Deaderick, Nicholas and Briana Watlington, Chase Phipps, Dru Phipps and Ashlyn Phipps; sister, Mildred Painter (Ted); special sister-in-law, Thelma Porter and her daughter, Cherie Porter; several nieces and nephews also survive. An Entombment & Committal Service will be conducted at 3:00 pm Monday, April 27, 2020, in the Oak Hill Funeral Home Portico. Rev. Tom Elam will officiate. Full Military honors will be conducted by The American Legion Hammond Post #3 and Gate City, VA Post #265. In lieu of flowers, the family requests memorials be made the Shriners Hospital for Children, 950 West Faris Road, Greenville, S.C. 29605. To leave an online condolence for the family please visit www.oakhillfh.com The care of William “Bill” Porter and his family has been entrusted to the staff of Oak Hill Funeral & Cremation Services.

The family of William H. Porter created this Life Tributes page to make it easy to share your memories.

Send flowers to the Porter family.